You are here: Home / Sleep Training / A Sleep Coach’s Story

I was not thriving. In fact, I was barely surviving. But, I was so in the weeds that I just didn’t know I needed out.

This is my story.

When my oldest was born he, like most babies, resisted sleeping anywhere except on me. So I would sleep propped up in bed, him on my chest, me shivering through the night barely covered, mostly comfortable, but mostly happy to get chunks of sleep. By the time my maternity leave was up, he and I would get about 3-4 hour chunks of sleep. Life felt manageable. I felt like I was functioning. I often tell parents to take a deep, hard look at life as it is that moment. Are they thriving? Or just surviving? If I had evaluated then, I would have said we were thriving.

Fast forward a few months, sometime when he was between 7-9 months old, and I was no longer surviving. Instead, I was barely hanging on.

In the  9 months of his life, my son had never napped longer than 20 minutes unless on me. And, somewhere along the line, he started waking more frequently at night, as frequently as every 45 minutes. He would often take 90 minutes to get back down, even while co-sleeping. Nothing I tried to get him to sleep longer or independently was working.

I was so exhausted that I barely have memories for those months due to my brain’s inability to lay down memory. 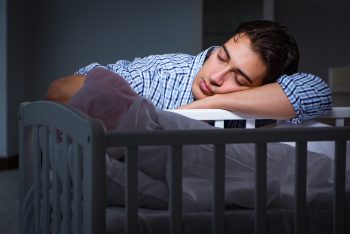 I was trying to get him to sleep in his crib since co-sleeping wasn’t working anymore was a disaster. I vividly remember falling asleep while hanging over the side of a crib with a hand on him, sleeping on the floor with one hand propped through the crib slats, sneaking away when he fell asleep- only to have my knees crack or the door creak. There was no end in sight.

If I had evaluated then- I was barely surviving.

Imagine: I also have parents imagine what could be, what’s possible, what they wish sleep would look like. Often, their answers barely scratch the surface of possibility.

If someone told me then that things could change, and change quickly, I would have tiredly laughed. I had no bandwidth to even imagine what life with more sleep could look like. In fact, it felt better to not imagine. Yes, it felt safer to trudge through than it did to imagine a different way of life. Because, why imagine if it’s not possible?

What I didn’t know was that it was possible, that my baby was like so many babies, that my depletion from sleep deprivation was common, that there could be another way. That sleeping in a rocking chair did not need to be my indefinite future.

What I didn’t know was that the little I did imagine, the flitters of “what if” that felt so big and scary and unreachable was not enough. I hadn’t taken the time to evaluate my whole situation- the lack of sleep my husband also endured while commuting and working full time, the effects on our marriage, the effects on our health and my son’s health- the list goes on.

Looking back, I wonder what would have been different if I hadn’t been so afraid of the possibility of change- or rather, the fear of failure and thus no change happening. Would I have had the time and focus to be more present with my son, rather than just trying to get through the day? Would I have saved a ton of money from not needing to go to the local coffee shop/play place because it was the only thing open at 8 am? Would my husband and I felt more connected? Would I have felt less lonely in motherhood? Would my son have been able to stop taking reflux meds because he was less fussy (did that medication ever work anyway)?

Now, don’t get me wrong, I definitely dabbled in trying to find ways to get more sleep. I asked other parents (most were in the same boat as me or just shrugged because their baby slept way more than mine). I looked for books, I googled (though 12 years ago Google wasn’t really a great resource), I asked professionals.

Mostly, though, everyone else gave me their opinion.

When I called my pediatrician’s office, her assistant asked me if my son was still co-sleeping. When I replied “yes,” she gasped and told me

I needed to change that immediately or he would be in my bed until he was 13. I asked for resources–she told me to go to a bookstore.

We switched pediatricians. The new one told me sometimes adding cereal to the diet helped with sleep. This was dated evidence that even I knew.

My mother in law had no words of advice- just a shrug and “back when my kids were little we just let them cry. We would put them in the room and come back when it was time to feed them (at least every 3 hours).” This felt dated, especially since it was coming with the pretense of “back when my kids. . . “

When I finally went to the bookstore and found the aisle of parenting books, I just stood there in an exhausted state of overwhelm. How? How could there be multiple shelves on baby sleep, each with a different and seemingly definitive way to teach my baby to sleep more?

That state of overwhelm just led to more sleep deprivation. “After all”, I thought as I stared at 3 shelves of sleep books, “who has time to read a book?”

Even though I was overwhelmed, I got the idea. Either let the baby cry in increments, shut the door and drink some wine, or take a really long time with lots of gradual change. Except for the wine, I none of these sounded good to me. I’m not supposed to let my baby cry, right? (though he already was). But, how can I have the patience and consistency needed for the gradual approach that is going to “maybe” get me an extra hour of sleep after 2 weeks of trying? I felt helpless.

Trust and Be Trusted: I.E. Be Confident in Your Choice

After giving up on the “gradual” and “no cry” sleep books and recommendations, we made two more attempts at sleep training- one intentional, one reactionary. This is where trust comes in.

My recollection of that night was that we put my son his crib, then 9-10 months old, said goodnight and shut the door. After a pause, he began crying. I stood outside his door waiting to go in, waiting for him to fall silent into a blissful sleep (that’s what happens, right?). Periodically I would hear him pause just long enough for my mind to think maybe, just maybe, he fell asleep. Then the crying would start again. I would go in out of exasperation and doubt. I would check on him and leave again. This is the part where I didn’t trust the process, or him, or my choice of methods. This is also the part where we had no idea what we were doing or when to intervene. I now know better.

In my recollection, he cried straight for two hours before I finally went in and slept hanging over the crib with my hand on him, me waking frequently out of discomfort and him waking at his normal frequency.

This first attempt at sleep training was intentional- at least more intentional than the following attempt. Watch out-  spoiler- this attempt didn’t work. And, it didn’t work for multiple reasons.

First of all, we didn’t know what we were doing (I didn’t finish reading that book, or hell, maybe I didn’t even buy it.) Second, I didn’t trust the source- my mother-in-law. But, she was there as a support person, so we gave it a try. And third, I had no reason to trust the method.

At some point after his first birthday, and a year of my being a stay at home mom to an adorable baby that still wasn’t napping or sleeping through the night and often waking at 4:30-5am- an adorable baby that needed me to play with him all day (due to not napping), I couldn’t handle the days anymore. I needed a break, some sanity, some respite to gather my mind. I was grumpy. No, pissed at the world, but no energy to show how disheartened and unhappy I was.

On a particularly challenging day, out of reaction to my world being upside down, I put my son in his crib for a nap. I said goodnight and told him that I loved him, shut the door and walked away. He cried on and off for probably an hour. Then, he slept for 3 hours. And every day after that he would take a 3-hour nap.

It wasn’t pretty, and I didn’t like him crying, but I knew in my gut that he could do this and that he needed it too.

I knew he was safe in his crib. I knew I could go in at any moment. I knew I HAD to have a break. I knew this was the best option for both of us. I had to trust it.

Today, I wish that we sleep trained out of reacting rather than with thought through intention. But I know 100% that this was successful because of the trust I had that I HAD to make a decision and that  I was supported by my husband and everyone around me to make a change.

His night wakings lessened (though stuck around until he was 18 months of age). But life was now manageable. I could have a break during the day, he was more rested and happier. Our interactions were more loving- and I was more present as a parent. My mental health was better and my perspective on life was better.

It is this story that I carry as I work with families. I understand the impact that sleep deprivation has on them, their baby, their relationships, their work- every aspect of their lives. I understand the judgment and endless, completely unhelpful opinions that are thrown on them. I understand the fears behind their decisions to make a change. I’ve been there. I’ve lived it. So, I walk next to people, as someone they can trust, as someone who has been through the same thing, and guides them to that new world I help them imagine.